For the Hell of it: the longest Antarctic flight on record

Australian journalist, David Burke, was aboard the first direct flight from Melbourne to the South Pole. Taking place in the still frigid month of September, it was to be anything but routine.

“Prepare for crash landing!”, comes pilot Fred Gallup’s voice over the crackly intercom. Despite Fred’s deliberately calm tone, the rest of us hunkered down in the minus 50-something degree fuselage, are already saying our prayers. The hydraulics in the nose gear are frozen, the radar is ‘out’, the cargo door won’t shut, the windscreen is smashed are our very last drop of fuel is about to go. Why did I ever say ‘yes’ to this mission?

These are the words of Australian journalist and adventurer, David Burke, on the occasion of the first non-stop flight from Australia to the South Pole, in September 1964. Despite the considerable resources, technology and skill of the US Navy, Burke’s experience serves to remind us that one should never take anything for granted in the Antarctic. Burke takes up the story.

The brainchild of Rear Admiral Jim Reedy, commander of the US Navy’s support force, Operation Deep Freeze, the plan was to complete his series of the world’s last great inter-continental flights and, in the process, drop a parcel of mail at the South Pole to the people of Deep Freeze’s Amundsen-Scott Base.

Instead of landing at the pole, the mighty Hercules C-130 (dubbed Adelie) would then proceed to the US base at McMurdo – a trip calculated to cover some 7000 kilometres in just under 16 hours. The fuel load alone is over 30 tonnes, nearly half of the entire weight of the fully laden aircraft. I need not have worried: though we seem to swallow every last metre of Avalon’s strip before our gallant Herc lifted off.

With me was Dr Phil Law, the only other Australian, and then head of our Antarctic Division. The journey began at Avalon airfield just outside Melbourne and I remember being comforted by the enormous amount of fuel we were taking on board for this historic flight. The problem was that, in order to make what would be the longest Antarctic flight on record, we needed to take off about five tonnes overweight. I need not have worried, we lifted off on a very pleasant Victorian spring evening, proceeded out over Port Phillip Bay, across Bass Straight, over Tasmania and up into the clouds beyond.

Sleep was fitful amid the drone of the four huge turboprops and just after midnight we crossed the Magnetic South Pole, our first navigational objective. Phil and I stared for some time at the majestic blue-green aurora that coaxed us south. The sight both comforted and disturbed me at the same time, for the beauty of Antarctica is always underscored by an unpredictability that tests the most skilful pilots and navigators.

As we cross the Antarctic Coast, a dim sheet of white far below, I recall the heroic exploits of our celebrated explorers, Mawson and Wilkins, who pioneered exploration and flight on this incredibly harsh continent in impossibly fragile and inadequate machines. Despite our altitude of 8500 metres, the surface below is rapidly rising to meet us. Just 4000 metres now separates us from the ice below.

We approach the Pole without radar or tracking radio from the ground as all these systems have mysteriously failed. Instead, the Admiral, as cool as you like, informs Amundsen-Scott to build a bonfire! Despite the seemingly impossible request, a faint plume of black smoke begins to rise from the most southerly point on Earth.

Our drop of newspapers and letters takes place without incident, but I am reminded that the Admiral has just created two more records; the earliest and the coldest long distance Antarctic flight – it’s -620C outside! Far too cold to land, it was at this point things began to go ‘pear-shaped’. First the windscreen shattered. Fortunately the glass held in place, but it crazed like a car windscreen. Then the cargo doors with frozen seals would not close, so the cabin depressurised, forcing us to fly way lower across the 12,000ft peaks of the Trans-Antarctic Mountains than normal and burning extra fuel. The thrill of the flight was already wearing thin at this stage when an urgent radio report came through. “There’s a blizzard at McMurdo,” the Admiral informs us, “so we’re shooting for Byrd station.”

This may sound routine to the reader, but factor in the events just described, add the extra miles to Byrd and the situation changes enormously. Furthermore, my comfort is not enhanced when I see the chief mechanic rummaging for a Lockheed service manual that I notice is labelled “Landing Gear”! Crikey, what now?!

A tiny amount of moisture in the hydraulic fluid had frozen, seizing vital valves in the nose undercarriage. This means the nosewheel and all-important ski hangs limp and flaccid beneath the cockpit like a broken foot. Ever resourceful, the crew extract from the bowels of the aircraft an enormous chain and attach it to the afflicted leg. Like Volga boatmen we all tug and strain in unison to secure the wheel as best we can. The chain is locked off with a prayer.

No sooner had we donned our hardhats, strapped ourselves to immovable parts of the fuselage, than Fred’s voice came over the intercom again. “Hang on, we’re going in.” I vividly remember staring at the 16200 litre fuel tank, now bone dry, wondering what sort of deadly projectile it would become when we “went in.”

With the big Hercules at a ridiculous angle, nose way in the air, Fred brought the crippled aircraft in at just above stall speed, touching down with the main gear and dropping the nose at around 40 knots. The chain holds, thank heaven, and almost immediately the four engines cut out leaving us to shudder to a stop on the rough, ungroomed ice.

Despite the incredible drama, we are all elated as we exit the plane in -40 degree cold. Aviation history is made, by the seat of our pants, as it so often is.

I still smile when I read Phil’s notes on the flight. Not known for overstatement, Dr Law observes, “A memorable and historic flight … and one prosecuted with the highest competence.” Here, here! 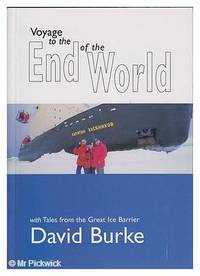 For the record: 7110 kms Melbourne to Byrd via South Pole in 15 hrs 39 mins. - the greatest duration of any modern Antarctic flight.

The author, David Burke OAM, is a prolific author and historian. His quest to document and research Antarctic events has made him an explorer and adventurer in his own right. David has made six trips to Antarctica using both military and civilian transport. His first was by US Navy icebreaker in 1958 and his most recent was with Adventure Associates aboard the Kapitan Khlebnikov in 2002.

His most recent book is titled, Voyage to the End of the Earth (Envirobook, ISBN 0858811960) and includes detailed accounts of his own and others’ journeys to Antarctica.