Not a lot happens on South Georgia these days... thank goodness!

Travel about 2000 kilometres east from Tierra del Fuego, at the very tip of South America, and you might stumble on its precipitous and windswept shores. At 54 degrees S and 37 degrees W, South Georgia is about as remote as any place on earth could possibly be.

First sighted in 1675 by a hopelessly lost British merchant vessel, South Georgia didn't feature again until our beloved Captain James Cook stuck a flag in it on January 17, 1775. Tipped off by Cook's reports, sealers later arrived in their droves to liquidate the island's fur seal population, which they did in less than ten years.

Numerous intrepid and enterprising soles traversed its shores since then, including the famous antarctic explorer, Sir Ernest Shackleton, whose arrival at Stromness after the loss of Endurance is the stuff of legend. With him on the outward voyage at least was his photographer, Frank Hurley, who snapped this vista (left).

My first vision of this harsh and foreboding land would have been almost identical to that of the first explorers. Standing on the bridge of the modern 6,000 tonne Akademik Sergey Vavilov, a converted Russian oceanographic vessel, I first saw its snow-encrusted spinal ridge pierce the thick bank of clouds that almost constantly shrouds the island's stark features.


Around almost every corner of the jagged coastline is another glacier. Huge creeping masses of metamorphic ice beating a slow-motion path to the sea, occasionally calving great deep blue chunks to form icebergs.

The ship skirted the northern edges and its islets, making for Cumberland Bay and King Edward Point, the nominal capital of South Georgia. Embedded deep in the sheltered fjord, the British garrison has been there ever since the brief Argentine occupation in 1982. Housed in sparkling new barracks at King Edward Point, they overlook the sprawling desolation of the abandoned whaling station of Grytviken just a few hundred metres away.

As recently as thirty years ago, this tranquil and splendid harbour would have been stained red for months on end as the mighty mammals were carved up for their flesh and blubber. The putrid stench of decaying meat, the acrid smoke from the many cookeries and the clamour and bustle of messy industry was the norm here for over fifty years.

After the last whales were dismembered and gutted on South Georgia in the mid 1960s, Grytviken, and the similar shore stations at Leith, Stromness and Husvik, were simply abandoned and left to crumble. Walking around the rusting and decaying ruins of these enormous factories is an unsettling experience. It's like Auschwitz for whales and I'm continually troubled by visions of the enormous carnage that must have occurred here and in the nearby seas.

On the fringes, and often in the midst of this chaos, seals, penguins and numerous seabirds now congregate, oblivious of its dark history. Playful fur seal pups, now back in abundance, confront you in mock attack. Pods of enormous elephant seals loaf like great stinking, belching blubber-filled condoms, occasionally squirming for a better view of me as I walk cautiously past. These are the small ones, perhaps just a tonne apiece. The larger males, often three tonnes or more, have gone fishing for a few months.

An albatross enjoys a predator-free life » 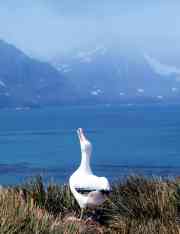 Away from the ghostly iron and steel, South Georgia teams with wildlife, and this is its new attraction. Majestic albatross, hardy petrels and the crack Skua gulls all patrol the crisp air around the island, nesting in cacophonous masses on the tussock grass covered slopes and ledges. A recent census counted about thirty different breeding species and twice as many visiting species. The combined bird population of South Georgia numbers well into the millions.

Not to be overlooked are the six species of penguins, ranging from the abundant little Macaronis, through the regal Kings and cheeky Gentoos to the much rarer Adelie, Chinstraps and Rockhoppers. These lovable little creatures often formed honour guards for us when we went ashore in Zodiacs from the Vavilov, hooting and catcalling as we moved carefully amongst their rookeries.

South Georgia, once again replete through isolation and human inactivity, has all but returned to its former glory, marred only by man's untidy monuments to greed and cruelty.


Words and pictures by Roderick Eime