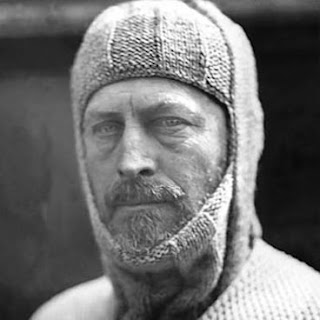 The blizzard eased and at last the long, harrowing nightmare seemed to be coming to an end. Suffering snow-blindness and severe malnutrition Douglas Mawson staggered toward the Antarctic Coast hopeful that his supply ship had waited beyond the appointed rendezvous. Three months of deprivation, hunger and hardship suffered in the most hazardous and enervating of conditions had reduced him to a mere skeleton of a man. He stood alone at one of the coldest and windiest places on earth and scanned the blue and white ocean for the ship that would take him to safety but all he saw was the SY Aurora sailing away toward the distant horizon.

Douglas Mawson was born in Yorkshire, England in 1882; his parents Robert and Margaret Mawson emigrated to Australia two years later. After completing high school Douglas passed the University of Sydney entrance examination at sixteen years of age and chose a three-year degree in mining engineering, graduating in 1902. Mawson made a geological survey of Vanuatu (New Hebrides) in 1903. A couple of years later he was appointed a lecturer at the University of Adelaide.

With famed English explorer Ernest Shackleton, Mawson left New Zealand on New Year’s day 1908 onboard the 300-ton barquentine Nimrod. Among the party was Mawson’s mentor, T.W. Edgeworth David, professor of geology at Sydney University. There was time for just one expedition before the long Antarctic winter closed in and Edgeworth David led a party of six which included Mawson to scale Mt. Erebus an active volcano which towers 3,974 metres above the ivory world. Mawson was spellbound by the amazing contrasts of fire and ice emanating from the volcano’s crater.

As soon as practicable Shackleton despatched two parties, one to the South (Geographic) Pole the other led by David and Mawson to the South (Magnetic) Pole, their first priority was to take magnetic observations at all suitable points and to make a geological survey of South Victoria Land. Mawson, David and Alistair Mackay set off on their 2030 kilometre trek on September 26, 1908. After a perilous journey, they raised the Union Jack on January 15 1909 at the South Magnetic Pole.

The return trek was even more trying, exhaustion, hunger and snowblindness plagued the party until they returned safely to the coast on February 5, 1909. Shackleton’s party was not so fortunate and after 128 days and a trek of 2736 kilometres, they were forced to turn back just 180 kilometres short of their goal.

Shackleton returned to Britain where he was knighted, while the Australian contingent was given a rousing welcome back in their homeland. Before long Mawson was making plans and on December 2 1911 he left Hobart, Tasmania on board the M.Y. Aurora with a party of thirty men bound once again for the vast frozen wasteland that is Antarctica.

After encountering gale force winds and mountainous seas, a small group landed at Macquarie Island, 1.370 kilometres SSW of Hobart and established a scientific and radio base. Aurora headed south again on December 23, 1911 and before long she was edging cautiously through swirling mist and fog. Without warning a mighty iceberg rose silently out of the gloom. The eerie creaking of the old ship’s timbers and ropes were the only sounds as Aurora slipped through the black water. Approximately one mile long and half a mile wide, the iceberg was scoured with cracks, crevasses and caves. Every man aboard stared at the towering spectacle of mass and colour where every shade of blue gleamed with transcendent beauty and menace.

Aurora sailed deeper into the frozen sea of pack ice before land was finally sighted on the sixth of January and two days later a small group put ashore at Commonwealth Bay. Mawson named the site of their proposed Winter Quarters, Cape Denison. Supplies were unloaded before the Aurora sailed away, she would return next summer. Toward the end of the month, the main hut and workshop were nearing completion and on the thirtieth, the eighteen-man party were sleeping inside the hut. By early February 1912, the weather had deteriorated as hurricane-force blizzards screamed down from the high Antarctic ice plateau. The realisation that Mawson had chosen one of the windiest places on earth for the expedition’s base was not long in coming.

Mawson had planned to utilise modern technology, in addition to radio he had brought a Vickers REP aircraft but howling gales and mechanical problems kept the plane on the ground. However, it did perform some useful tasks on skis as an air-tractor, hauling loads of up to 370 kilos. During a lull in the weather Mawson, Madigan and Ninnis sledged south for nine kilometres where they dug an ice-shelter, which was supplied with food and equipment, brought in by sledging parties and the air-tractor, they named the place Aladdin's Cave.

The long dark Antarctic winter closed in and the little group settled down to await the spring, as blizzard after blizzard raged outside, the men grew impatient. Finally in November 1912 five expedition parties set out, Mawson had allocated the most dangerous task to his own group of Dr Xavier Mertz a Swiss Mountaineer and ski champion, Lieutenant Belgrave E. S. Ninnis and himself. Eighteen Greenland Huskies would pull three sledges; their goal was to penetrate through frozen, unchartered territory as far east as possible. An inspiring legend of courage, endurance and survival would soon be engraved in the annals of Antarctic exploration.

In 1954 members of the first Australian National Antarctic Research Expedition landed on mainland Antarctica to commence work on its first station which was subsequently commissioned on 13 February 1954. In honour of the man who had devoted so much to Antarctic exploration and science it was appropriately named Mawson Station.

The 50th anniversary of Mawson Station this year is cause for celebration and quiet reflection. Australia Post has recognised the importance of the occasion by issuing a series of stamps and the Royal Australian Mint has produced a commemorative coin. Mawson continues to be at the cutting edge of Antarctic scientific research from global warming, ecology, microbiology and geology to immunological projects.

Sometimes mere words fail when such awesome beauty and majesty confront us but one thing is certain, Antarctica is a place like no other. It is the coldest, driest, windiest and highest of all the major landmasses on the planet. Its Transantarctic Mountains are 65 kilometres wide and 2,000 kilometres long while the highest peak, Vinson Massif in the Eternity Range of Western Antarctica rises to 5,140 metres. Antarctica is a lonely, wild and whimsical place. A place where days and nights are longer than anywhere else on earth. A place which has one of the greatest concentrations of wildlife on earth, it is a place where active volcanoes soar from the frozen, wind-swept plateau, it is also the fifth largest of all the continents and the least understood, it is indeed man’s last earthly frontier.

It seems probable that Captain James Cook and crew onboard HMS Resolution were the first to visit Antarctic waters in 1773. Cook wrote, ‘A strong gale attended by a thick fog, sleet and snow, which froze to the rigging as it fell and decorated the whole ship with icicles. Our ropes were like wire, our sails like plates of metal and the sheaves froze fast in the blocks, I have never seen so much ice.’

The Russian explorer Thaddeus von Bellinghausen first sighted the continent at 69 degrees south and 2 degrees west, on January 27, 1820. However early sealers and whalers were known to frequent the waters of the Antarctic Circle. Later such famous pioneers as Weddell, Palmer and Ross carved their names into history when they chartered the ocean around the South Pole. Today a new breed of adventurers is again coming to this majestic polar land. Luxury passenger liners such as Marco Polo cruise into waters first seen by Cook during the Antarctic summer, to provide unforgettable sightings of the mystery continent.

Adventure Associates of Sydney have regular adventure cruises from Australia, New Zealand, South America and South Africa in modern, well-appointed Russian-built icebreakers and offers some of the most thrilling and meticulously organised tours of Antarctica available. Naturalists, lecturers, doctors and dedicated staff ensure that each expedition is not only an incomparable adventure but also a comfortable and thoroughly edifying one. One recent traveller with AA commented, “The trip was a dream come true, fulfilling a lifetime’s ambition. Every time we thought it could not get any better it did. There were many moments when we were speechless with wonder.”

To protect the Antarctic environment the Madrid Protocol was signed in 1991 in order to provide much-needed, comprehensive safeguards. After prolonged discussion and negotiation, the joint efforts of France and Australia were successful in having mining banned indefinitely.

The scientific world has learned much about our fragile planet from Antarctica yet despite the many secrets already unlocked and ongoing scientific research, contemporary understanding of Antarctica might be compared to a small piece of pack-ice floating on a vast frozen sea. It is little wonder that those who live and work in the various stations dotted around the South Pole are filled with such enthusiasm and excitement. We have only just begun to learn about this awe-inspiring white land.

Such names as Amundsen, Scott, Shackleton and Mawson are synonymous with Antarctic exploration and thanks to the climate; elements of the past are still preserved. A visit to the superbly preserved hut of the Scott expedition of 1901-1904 reminds us of the Spartan facilities and hardships endured in the early days of Antarctic exploration. Companies like Adventure Associates who are totally dedicated to minimising the impact of each expedition, actively pursue a dedicated environmental policy, which follows to the letter, internationally agreed regulations.

Hardly able to stand and almost delirious from pain and malnutrition, Mawson couldn’t believe his luck as he watched the M.Y. Aurora sailing away. He staggered to the summit of an icy ridge where at long last, the winter quarters came into view. The main hut seemed to be surrounded by black rocks, probably exposed by melting snow and ice. Suddenly it seemed to Mawson that one of the rocks moved, he thought the end was near and then it waved.

A man began to run toward him. “My God! Which one are you?” gasped Frank Bickerton. Mawson later learnt that five men had been left behind at the hut, where full preparations had been made for them to winter and later search for Mawson’s missing party. Douglas Mawson had survived one of the most harrowing ordeals in the annals of human courage and survival. His legacy lives on with the magnificent work, which is carried out each and every day by the men and women of Mawson, Davis and Casey Stations, Antarctica.

The life and times of Douglas Mawson read like something from an adventure novel. The achievements of the Australasian Antarctic Expedition (1911-1914) which he led were instrumental in establishing Australia’s commitment to scientific study in Antarctica. He located and chartered the South Magnetic Pole area and undertook the longest unsupported Antarctic sledge journey of nearly 3000 kilometres. Mawson was an early advocate of conservation and his untiring efforts led to the abolition of sealing. He also worked diligently for international control of all Antarctic wildlife and was light-years ahead of contemporary understanding in the scientific study of eco-systems. Sir Douglas Mawson received many awards during his lifetime, including a knighthood but possibly his greatest reward is in the burgeoning understanding and environmental protection of the last frontier.

The author is a Queensland-based journalist who is regularly published both in Australia and around the world.
Posted by rodeime at 09:41