The International Association of Antarctica Tour Operators (IAATO) predicts that new fuel regulations will lead to a steep decline in the number of cruise ships sailing in Antarctica. An amendment passed by the International Maritime Organization (IMO) that bans the use and carriage of heavy fuel oils in the Antarctic beginning in mid-2011 is projected to lead to a nearly 23 percent decline in cruise tourism to the region, IAATO said.

The ban goes into effect Aug. 1, 2011, and will mostly impact large cruise ships that carry more than 500 passengers and briefly pass through Antarctica waters, without disembarking passengers, while traveling from South America. Designed to minimize the potential for accidents involving heavy fuel oils, the ban will force larger ships to deplete any banned fuel onboard before traveling into the region.

As a result, it is expected that a number of these ships will alter their itineraries to avoid the area, which will result in a projected decline in tourism from a current annual estimate of 35,000 visitors for the 2010-11 season to roughly 27,000 the following season. “Our mission remains the advocacy of responsible tourism operations geared toward the safety of human life and the protection and preservation of the Antarctic environment,” said Steve Wellmeier, executive director of IATTO. “As a result, our members are receptive to those changes that help accomplish these objectives.”

Unaffected will be the majority of smaller, expedition-type cruise vessels -- those carrying 60 to 500 passengers -- which in recent years have relied on lighter distillate fuels such as marine gas oil and marine diesel oil. These fuels are not included in the ban.

IAATO is a member organization founded in 1991 to advocate, promote and practice safe and environmentally responsible private-sector travel to the Antarctic. IAATO currently has 110 members. IAATO members work together to develop, adopt and implement operational standards that mitigate potential environmental impacts. For more information, visit www.iaato.org.
Posted by rodeime at 01:00 No comments:

The Antarctica season beginning in November 2010 is likely to be the last one as it has been known. Proposed changes to the type of fuel ships are allowed to burn and carry in this fragile ecosystem have now become a reality, making the future of big cruise ships in Antarctica uncertain.

A rule was passed last year by the International Maritime Organization (IMO) banning the use and carriage of heavy fuel oils, the type of fuel commonly burned by big ships, in the Antarctic. The reasoning is that a spillage of this type of fuel is considered too much of a risk—and accidents do happen, as we witnessed in 2007, when Gap Adventures' M/S Explorer was holed by ice and sank.

Read full story (opens a new site)
Posted by rodeime at 12:09 No comments: 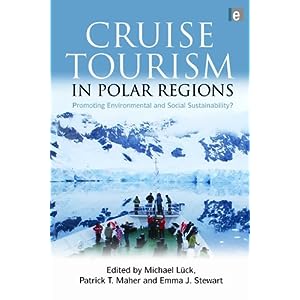 Cruises are the primary form of tourism in the Polar Regions and cruise ship tourism in both the Arctic and Antarctic is expanding rapidly. Yet little is known about the practices, implications and challenges of tourism in remote polar seas. Climate change is dramatically altering the impact and potential for such forms of tourism. Recent incidents, such as the sinking of one cruise ship and the grounding of two other cruise vessels in the Antarctic Peninsula in 2007, highlight the need for a critical examination of the implications of polar cruise tourism.

A specific critical study of polar cruise tourism is therefore timely. The industry has moved beyond its infancy, and is now entering a maturing phase with increased numbers and types of vessels, more demanding routes, and more regular and predictable patterns of activity. A range of factors is likely to support this maturing phase, including increasing tourist demand for travel to remote places, overall popularity of cruising worldwide, more sophisticated promotional activities by tour agencies, increasing awareness at the political and community levels about the benefits and costs of cruise tourism, and changing ice regimes in the polar regions. The increase in cruise activities, and the associated risks of accidents, as well as the potential and actual impacts of the large numbers of tourists in the polar regions bring with it management challenges for sustainable use of these regions. This book discusses critically the issues around environmental and social sustainability of the cruise industry in Polar Regions. Authors from Canada, USA, Europe, Australia and New Zealand are experts in their respective fields and take an innovative, critical and at times controversial approach to the subject.