Seal basks in the sunshine as Zodiacs from L'Austral tour Foyn Harbour. Picture: Roderick Eime.
TRAVELLING to the end of the Earth can now be done in hedonistic comfort, writes Roderick Eime.

Antarctica is for the hardened traveller, the gritty explorer and world adventurer used to privations and hardships. That is, until the arrival of vessels like L'Austral.

Le Boreal took to the seas in May last year, followed by L'Austral in June this year. A third, as yet unnamed, vessel will be launched in the middle of 2013.

Read Full Story
Posted by rodeime at 08:57 No comments:

One hundred years ago, the so-called Heroic Age of Antarctic exploration was at its height. Men like Scott, Shackleton, Mawson and others, forgotten to time, opened up the great Southern continent for science, exploration and adventure. Their exploits were consumed voraciously by the popular press, the adoring public following their every step as these incredible men, apparently impervious to hardship and deprivation, forged deeper and deeper into the harsh frozen realm in search of glory in the name of the great British Empire.

The Great War stifled many plans and left a world bruised and battered but Antarctic exploration continued, albeit subdued. In the Second World War, Britain was afraid its hard won Southern interests may be threatened and the secret Operation Tabarin was organised in 1943 to patrol and report on any enemy movements in the region around the Antarctic Peninsula. Bases at Deception Island, Hope Bay and Port Lockroy were expanded and manned by naval personnel who had no idea where they were headed. Issued sunglasses on their departure from Britain, they surmised their destination would be warm and tropical. Wrong.

Further bases were added and this effort gradually transformed into the current multi-national presence we see today. Visitors aboard Antarctic cruise vessels frequently visit these sites. Some are maintained while are others have been left to “benign neglect”. One in particular, Port Lockroy, celebrates one hundred years since its establishment, first as a whaling outpost, then 'Base A' as part of Tabarin in 1944.

Abandoned in 1962, but restored and preserved since 1996, Port Lockroy is now the most visited site on the Peninsula with visitor numbers hitting a peak of 17,000 in a recent year. As many as 30 vessels visit the 'living museum' in the course of a season (between November to March) and the little post office handles around 17,000 items of specially marked items of mail. The gift shop carries everything from postcards and books to fridge magnets and fleecies. One passenger from a private charter spent $12,000 in a single visit, so the little outpost certainly pays its way.

Once the preserve of the male-only British Antarctic Survey, Port Lockroy is currently manned, if that is the correct term, by a team of five, four of whom are women. Their duties include occasional surveys of the healthy Gentoo penguin colony and serving the stream of guests hungry for genuine Antarctic souvenirs. An additional Nissen hut has been built to enhance crew comfort, but otherwise the structure is faithful to its original design, complete with recreated radio room, kitchen and common areas.

“Anyone from any country can apply to work here for a season,” says Ulva the current base commander and officer of the UK Antarctic Heritage Trust, a not-for-profit charity set up to maintain the historic bases.”We're only supplied once a year, but also rely on help from the many cruise ships to bring additional items and ferry staff.”

Fancy a stint at an Antarctic base? Why not apply for a position on Port Lockroy? For information on the UK Antarctic Heritage Trust and its work, visit www.heritage-antarctica.org
Posted by rodeime at 20:34 No comments:

by Craig Hoggett | The Mercury

TOURISTS forking out top dollar to visit Mawson's Hut for centenary celebrations this summer are likely to face disappointment as the "Antarctic factor" heaves an enormous icy obstacle in ships' paths.

Expedition cruise ship MV Orion is due to start its 19-night Southern Ocean voyage on Thursday, with prices for the 100 passengers starting at $19,365 a person.

Orion expedition leader Don McIntyre said the Antarctic always had challenges but an iceberg the size of the ACT blocking access was "unique".

"Whilst it's not looking good, no one will know until we get there," Mr McIntyre said.

"We always maintain a simple philosophy we work with the Antarctic factor. You cannot dictate terms with Antarctica, it lets you in at its pleasure you have to work with it, you can't fight it."

A 2500 sq km tabular iceberg was part of a much larger ice mass that broke free from the Ross Ice Shelf in 1987 but subsequently broke up as it drifted westwards.

Parts of the "B9B" iceberg have grounded on the approach to the Mawson's Hut site at Commonwealth Bay. 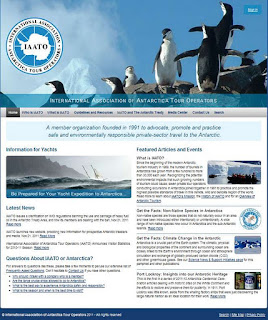 The International Association of Antarctica Tour Operators (IAATO) has launched a new website, providing a wealth of new information for prospective travelers to Antarctica. The new site also features an expanded Media Center for journalists and enhanced features for IAATO members.

"The familiar URL www.iaato.org remains the same, but the similarity stops there," noted IAATO Executive Director Steve Wellmeier. "The new site provides much better graphics and navigation tools, including a search function and site map. One of our goals is to provide accurate information for the Antarctic traveler, particularly in the area of environmental stewardship, guidelines for visitors, and answers to the many questions they might have."