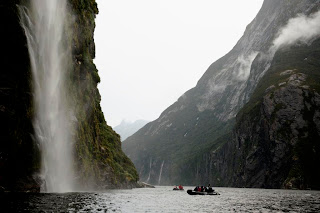 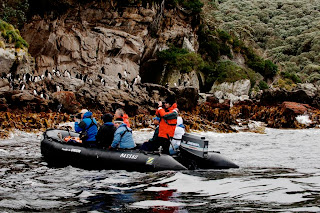 Immerse yourself in some of our planet's most extraordinary biodiversity.

Protected by the Southern Ocean, secluded and seldom visited, the Australian and New Zealand Sub-Antarctic Islands, recognized by UNESCO as one of the worlds' precious regions of unique biodiversity, will be visited by the expedition cruise ship Orion in December, 2009.

Today these remote nature reserves enjoy World Heritage status, recognised for their volcanic and glacial geological formations and extraordinary diversity of flora and fauna - much of which endangered or recovering since being discovered and later plundered in the late 1700's and early 1800's by sealers and whalers.

Home to over half of the world's seabirds, some of which exist nowhere else, this wildlife paradise contains 40% of the world's albatross species and 50% of the world's penguin species including the endangered yellow-eyed penguin, plus hundreds of thousands of other endemic birds - petrels, prions and cormorants.

The expedition team will include the highly respected British zoologist and naturalist Dr John Sparks, who travelled to Antarctica onboard Orion in 2006.

At Snares there is every expectation guests will see Sooty Shearwaters, the endemic Snares Crested Penguins, Snares Fernbird and Tomtits.  On Enderby Island expect to see pipits, parakeets and plovers, Hooker's Sea Lions, and perhaps even the Auckland Island Flightless Teal and Sub-Antarctic Snipe. Campbell Island, home to the Southern Royal Albatrosses, has the highest diversity of breeding albatrosses of any island in the world.

And then there are plant species that have to be seen to be believed, including 5 meter high tree daisies on Snares, giants compared to their relatives in more temperate climates.

These two expeditions to the Sub-Antarctic islands are designed for nature lovers and photographers alike. The remnants of the old whaling station on Macquarie Island, the high cliffs and numerous caves and arches formed by marine erosion on Campbell Island and the enormous sea stacks on the southern peninsulas of Snares present dramatic contrast to the prolific bird life, penguins, seals, sea lions and flora in this remote sanctuary.
………………………………………………………………………………..

Dr John Sparks has travelled all over the world making wildlife films, including five with Sir David Attenborough; he has written 11 books and visited Antarctica on many occasions. Details available at www.johnsparks.org
………………………………………………………………………………..

Fares from $10,630 per person twin share for an ocean view Category B stateroom

Suites from $14,660 per person twin share for a Junior Suite

Owners' Suites with French Balcony are $22,265 per person twin share

With 75 crew and a maximum of just 106 passengers Orion offers the highest staff to guest ratio and guest to public space ratio of any ship based in Australian waters.

Further information on all Orion Expedition Cruises to Antarctica, Papua New Guinea, Melanesia, Asia, New Zealand, the Kimberley and Arnhem Land can be obtained by visiting the website www.orionexpeditions.com